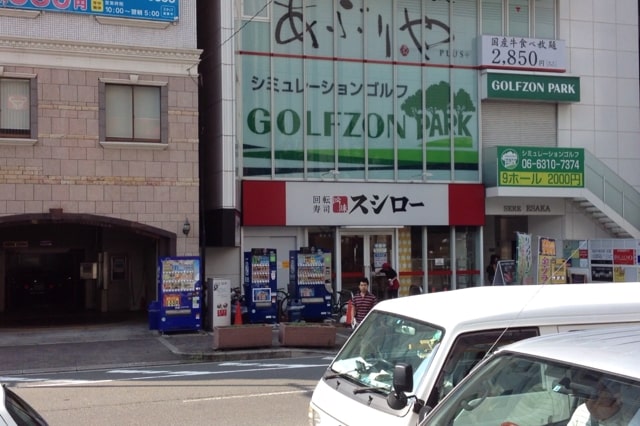 I have a car, two kids with big appetites, and a limited budget. Combine these with a craving for sushi and the obvious answer is Sushiro.

In Japan, independent sushi bars with artisan chefs are struggling to compete with kaiten, or conveyor belt, sushi chains, which feature low prices, quick self-service, ample seating and parking and a casual, kid-friendly atmosphere. Over the past five years the percentage of kaiten sushi shops among all sushi shops in Japan has increased from 50 percent to 70 percent today. Conveyor belt sushi was invented in Osaka, and Sushiro is also headquartered here, so why not experience this Osaka institution?

While the conveyor belt is the obviously automated part, what goes on out of sight in the kitchen is equally industrial. The rice is formed by machine and the toppings are bought in pre-sliced and frozen. But don’t let that put you off—the quality is consistent and, as we in the food industry say, “the freshest fish is frozen”. Also, the steady stream of customers ensures that nothing rides the belt too long.

Akindo Sushiro (usually shortened to just Sushiro) owes its success to its policy of pricing every plate at 100 yen (105 with tax). One plate holds two nigiri-zushi, but for expensive toppings like snow crab there’s only one. Push a button and a waitress counts the plates to total the bill.

Eat ten plates and the damage is still just 1000 yen, unless you’re drinking beer. But this isn’t a drinking atmosphere; it’s a family place to eat a lot for cheap. Both booths and counter seating are available. Powdered green tea is free (take one or two little spoonfuls, and mix with hot water from a spout at your table—press the cup against the rubber stopper to run the water).

Sushiro’s website (in Japanese) with a list of shops is at http://www.akindo-sushiro.co.jp/shop. Most shops are on suburban thoroughfares, so a car is handy, but arrive early—say 6:30, and on a weekday, to avoid waiting for parking. If cars are lined up, have someone go in first to take a number for seating.

For a visitor without car, I suggest the shop near Esaka Station (station number M11, two stops on the Midosuji line from the Shin-Osaka Shinkansen station). Take exit 8 which will put you on the street near a Lawson convenience store, go to the nearby intersection and cross the street to the south (on the same side of the tracks). Sushiro is to the right of a corner apartment building called Royal Esaka, on the ground floor in the middle of the block. (Note that Google Maps misplaces this shop on the other side of the tracks.) Being close to the station, this shop doesn’t have parking.

For the foreigner, it’s amusing to see the food go by and easy to pick what you want (be quick, but avoid taking dishes and then putting them back). There’s a touch screen to order udon, items that don’t appear on the belt, or to specify sushi without wasabi (“wasabi-nuki”). If you order, the plate will come on the belt atop a stand with your table color written and a computer voice will alert you (in Japanese).

Not recommenced: basil salmon and basil shrimp—basil is a poor match with vinegared rice. The kanifu salada is artificial crab (surimi) with mayo rolled in seaweed, and disappointing if you thought it was real.

A first glimpse at Java 9: Early access release of JDK9 on OpenJDK

Five things you may have missed over the weekend

Beginner: Are you stuck in programming should not do

10 Ways to Make Extra Money as a Graphic Designer

50 Tips and Insights About Productivity, Happiness, and Life

ABOUT US
Osaka.com is the ultimate portal for all visitors to Osaka. We aim to provide the most useful information to Osaka visitors with unique insights.
Contact us: webmaster@osaka.com
FOLLOW US
© Copyright 2020 Osaka.com. All Rights Reserved
MORE STORIES

A first glimpse at Java 9: Early access release of JDK9...