Setsubun is the turning point of the year – “the day before spring, summer, autumn, and winter”. However, in correlation to the lunar calendar, the new year began on February 3rd. As a result, it is named the day of Setsubun. It is the day that the spiritual world and the physical world are most connected. During the breaks of years, evil spirits could easily enter the physical realm and plague the harvest of farmers and people’s health. A way to prevent these spirits from entering is to throw beans around one’s house and at temples or shrines.

Setsubun stems from the Nuo folk religion in ancient China. This was originally an event to drive away demons with a bow and arrow made from peach trees. During the Heinan period (794 to 1185), the tradition made its way to Nara and adapted to “mamemaki” (“bean scattering”). In Japanese folklore, beans are one of the five grains that are a symbol of good luck. Rice is the main symbol for good luck but was too small to defend off the demons. Furthermore, beans contain a lot of nutrients, which also help drive out the evil spirits!

The main ritual, mamemaki, involves people throwing beans outside their front doors. In addition, a family member may wear an “oni” (“demon”) mask, while others thrown beans at them while shouting “Oni wa soto! Fuku wa uchi!” (“Devils out! Fortune in!”). The beans purify the house from the evil spirits from bringing bad fortune and health. The house door is then slammed shut to make sure the evil spirits can not enter. Thereafter, people eat roasted soybeans as a way to bring in good luck for the year. The amount of beans you eat corresponds to your age so your body becomes stronger and is less likely to become sick.

In some areas, mamemaki takes place at shrines or temples. An apprentice geisha performs an eloquent dance, after which, the other apprentices throw beans into the crowd. In other areas, priests throw small packets of soybeans as well as envelopes of money.

Ehomaki is a long sushi roll that people eat on the night of Setsubun. it is said that it started as a prayer for prosperous business in Osaka and Senba at the end of the Edo period. If you eat the ehomaki in the year’s “lucky direction”, while eating silently, your wishes will come true for the year. The sushi roll contains seven ingredients corresponding to the seven lucky gods:

Around the 13th century, burning dried sardine heads was a custom. The smell was strong enough to drive away from the demon spirits. The sardine heads are salted and dried before being hung on the tip of a “hiiragi” branch. People hand the sardines in the front of their houses. If the demons come close enough, the painful thorns of the hiiragi will deter them away.

Wood was also burnt due to the heat and the loud sounds of banging drums help deter the demons. Some of these traditions still take place today but for the most part, soybeans and thrown.

On New Year’s Eve, it is customary to eat soba. As they are very healthy, it symbolizes good health for the year. Additionally, they are long and thin, representing the longevity of life. In the lunar calendar, Setsubun is like New Year’s Eve so it is common to eat during the festival.

Konjac is a type of yam that is healthy for the body. Eating this during Setsubun helps to clean the inside of your body from any harmful bacteria or diseases.

Where to Enjoy Setsubun

The main temple is located in Chiba, however, the “sister temple” can be found in Osaka. They prepare a special stage where mamemaki takes place. Mamemaki is held 3 times in total, and at 10:30 am, 1:00 pm, and 3:00 pm. Celebrities and other popular guests throw the beans at the crowds of people.

The Tenmangu shrine was built in 949 and is one of Osaka’s most historic shrines (It also hosts Tenjin Matsuri festival!). The festival starts at 3:00pm, and costs 2000 yen per person. From 10:30am tickets are available to get the sushi rolls. As they are limited to the first 1,000 people, be sure to get there early!

This shrine is known for people with cancer to pray for good health. “Ohyakudo mairi” is the repetition of praying at the main shrine and returning to the entrance 100 times to have one’s wishes granted. During Setsubun, they hold mamemaki 3 times at 11:00 am, 1:00 pm, and 3:00 pm. Other goods such as mocha and raffle prizes are thrown out, on top of the usual soybeans.

Setsubun is a festival that crosses the boundary from the spiritual to the physical. It is steeped in mythology and history, which makes it such an interesting festival. If you have the chance to visit a shrine to take part in Setsubun, I would highly recommend doing so. If not, hosting your own Setsubun event in your own place is also a great way to spend time with friends and family. 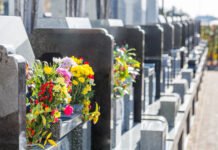 Tenjin Matsuri: The Dance of Fire and Water