Maybe you know, maybe not, but Osaka is home to a number of Japan’s, and the world’s, biggest companies. Daihatsu, Sanyo, Sharp, Panasonic, Maxell and even sports equipment manufacturer Mizuno are among them. With its sea port, international airport and central Japan location it’s not a bad place to set up business, and as I mentioned before, it’s got a fair old history of commercial dominance in this East Asia island chain.

And it is to two of these giants I turn this month as there are mixed fortunes for electronic competitors Sharp and Panasonic. Firstly, the ailing corporation, and inventor of the first LCD calculator, Sharp, announced it’s cutting its workforce, overseas and locally, by a whopping 11,000 (from an estimated 55,000) in a bid to save money. The company is experiencing a tough competitive cycle at the moment and is working hard elsewhere to find much-needed cash through share-selling and the like after losing some of its key TV market to rivals, such as the ever-growing Korean outfit Samsung.

However, on a slightly fluffier news note, Panasonic is to open some super-duper international hub showroom, or something, in the Umekita (http://www.grandfront-osaka.jp/en/) area now being developed just to the north of Osaka central station. In truth, I’m not quite sure what this means, lots of talk of “co-creation” and it being a place to “exchange ideas to think about and create new value for life together”. Errr, yeah, ermmm, what?

The three floors will be organised into four themes of ‘Living’, ‘Beautiful’, ‘Delicious’ and ‘Happy’. Hmm. Again, not sure. But basically what they seem to be talking about is a place to check out their latest gadgets, I think, with some seminars and workshops thrown in for good measure.

Two existing show rooms elsewhere in the city will be closed to be merged into this mega Panasonic Center. Well I say mega, and I’m sure the people at Panasonic will be happy for my hyperbole, but these things rarely turn out to be anywhere as interesting as the press release would like. However, they do give the electronic geek in us all a new place to go play, and possibly waste some more money should we succumb to the pull of the latest ‘must-have’ gadget. I confess a weakness in this direction, but it’s more for that US company with the fruit for a logo (and name).

So, if you’re an electronics nerd, or ‘otaku’ as they like to say here in Japan, or just like nice new buildings, then this would be the place to visit when it opens in April 2013. 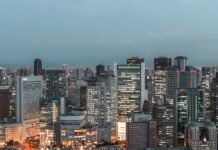