Osakasayama is a small city in the south of Osaka Prefecture that few people pay much attention to as their train speeds passed on the way to Koyasan. However, this diminutive urban area has had one of the most essential roles in shaping the Osaka we know today.

The reason Osakasayama has been so influential is because of its pond, Sayama-ike. At about 3km around, this pond is a focal point of the local community who use it daily for running, jogging or just a casual stroll with the dog. However, Sayama-ike is more than just a popular recreation ground; it is in fact the oldest man-made irrigation reservoir in Japan.

Several years ago, during survey and renovation works, huge wooden pipes were discovered under the north bank. Analysis of the tree rings suggested that the trees used to make the pipes were cut some time around 616 C.E. suggesting that the reservoir has been in use for around 1,400 years.

It was also discovered that the reservoir had been skillfully renovated several times since its construction. The first of these renovations took place around the year 731 C.E.  during the Nara Period. A Buddhist monk by the name of Gyoki, often thought of as the father of civil engineering in Japan, was appointed to oversee the project. Gyoki also assisted in the building of Todai-ji, the famous temple in Nara which also owned much of the land in what would become Osaka Prefecture.

The next significant phase of restoration came in 1202 and led by another influential monk, Chogen. Also a skilled civil engineer, Chogen is most famously remembered for rebuilding the great Todai-ji temple. During his renovation of the irrigation channels, he devised a clever method for supporting the banks and protecting the wooden pipes by covering vulnerable sections with recycled stone coffins.

Then in 1608 was another round of renovations and upgrades, overseen this time by Katagiri Katsumoto, an important samurai warlord in the service of Toyotomi Hideyoshi. Following the death of Hideyoshi in 1598, Katsumoto was appointed to look after Hideyoshi’s young son and heir, Hideyori. The north bank had been damaged by a powerful earthquake some years before so Katagiri had it rebuilt and further reinforced with large wooden spars. Katagiri died in 1615 under slightly mysterious circumstances 20 days after the death of his lord, Hideyori, following the second siege of Osaka Castle.

The network of irrigation channels spreading out from Sayama-ike was vast and complicated. At the height of its use, it supplied water as far north as the Yamato River, as far east as the Ishi River and as far west as the great keyhole shaped tomb of Emperor Nintoku. And not only did it help keep this large expanse of land fertile, it also reduced the effects of flooding in the area.

There is also a thought that it might have been partly responsible for the creation of Japan’s most famous warriors. While the land was owned by Todai-ji temple in Nara, they needed guards to watch over so much valuable farmland. And as these guards increased in wealth and status, they may have evolved into what would come to be known as samurai.

While Sayama-ike accounts for much of the history and story of Osakasayama, it was also home to the Later Hojo Clan. One of the most powerful clans during the turbulent Sengoku Period, Toyotomi Hideyoshi saw them as a direct threat to his rise to power. Thus he began a campaign against them culminating in the siege of the vast castle at Odawara in what is now Kanagawa Prefecture, near Tokyo. Toyotomi led a vast force of 200,000 troops against the Hojo and upon their eventual surrender, the heads of the Hojo Clan were forced to commit seppuku.

The family line did not end however as Hojo Ujinao, now head of the clan was exiled to Koyasan. A year later, Ujinao died and his adopted son Ujimori took control of the clan. Granted a small stipend of 10,000 koku (one koku was said to be enough rice to feed one person for one year), Hojo Ujimori took control of the Sayama Domain and set up his Jinya (headquarters) in Osakasayama. The Odawara Hojo would live in Osakasayama for 12 generations throughout the Edo Period.

The north bank of Sayama-ike is dominated by the Osaka Prefectural Sayama-ike Museum. Designed by the famous architect, Ando Tadao, this museum was purpose built to tell the story of Sayama-ike and to house the many amazing artifacts uncovered during the restoration works.

The entrance is reached by first descending down into a space between two long waterfalls and then up into an open air rotunda. The first thing you notice when you enter the museum is what looks like a slice of a mountain.This is in fact a cross-section of the original bank that was removed during construction.

Within this section of bank you can easily see the main phases of construction over its 1,400 year history, each phase a different colour and showing a clear line between them. You can also make out the many layers that made up the bank. Between each layer of earth was a layer of sticks and leaves to help with drainage and prevent landslides.

The path of the museum winds down to the base of the bank section and here you can see the original wooden pipes which were preserved in the mud for over 1,000 years. The bottom level tells the stories of Gyoki, Chogen and Katagiri Katsumoto and the impact they had on the pond. There are even examples of the tools they used which were also discovered in the mud.

The many small dioramas give a fascinating insight into how the irrigation system worked; complex gates and locks which were cutting edge technology of the day and show just how much of an engineering marvel this pond was. The artifacts of the museum are designated as national important cultural objects due to their historical significance.

One of the most impressive displays is a huge table holding a model of southern Osaka. The ancient irrigation channels and smaller storage ponds, represented by blue lines which light up at the push of a button.

The Osaka Prefectural Sayama-ike museum also contains a small library and a cafe and entrance to the museum is free of charge.

The pond itself has a wide promenade around the whole perimeter, perfect for a relaxing stroll. And despite being in the heart of a large residential area, there is still a clear view of the mountains that border Osaka Prefecture. There is also a large public playground on the east bank of the lake, perfect for the children to let off some steam.

Sayama-jinja is a small but important shrine in the southern part of Osakasayama, not far from Kongo Station. There is mention of this shrine in an ancient text called the Engishiki Jinmyocho. This book dates back to around the year 927 and was a list of shrines which were important at the time.

Unusually, the main torii marking the entrance to Sayama-jinja is actually on the opposite side of a main road. A short walk from the shrine is a large 400 year old house called the Yoshikawa Residence. Although this is a private house, they generally keep a panel of the main gate open so that people can see inside the courtyard.

This is a very small temple that sits on a hill a short distance from Sayama-jinja and next to a small orchard of Persimmon trees. Furin-ji is home to a hanging scroll depicting an image of Buddha which is a national treasure although this is not on public display.

Three of the four roads that make up a little known pilgrimage trail between Kyoto and Koyasan also pass through Osakasayama. The Koya Kaido represents the original route that Kukai, the founder of Koyasan, would have walked when traveling between his monastery and the ancient capital.

The Nishikoya (western road), Nakakoya (middle road) and Shimokoya (lower road) wind their way through the town before merging into one single route close to Kawachinagano station just a little way to the south. The Koya Kaido then continues through Kawachinagano before crossing the mountains that separate Osaka and Wakayama Prefectures. Two of the original Choishi, stone mile markers, can still be found along the Nishikoya route.

One surprising aspect of Osakasayama are its famous grape farms in the Ono district on the southern edge of the city. First established in the Meiji Period of the 19th century, this area was once full of rice paddies. But one farmer discovered that the hilly terrain and good drainage made it ideal for growing grapes and a farmer from the neighbouring city of Kawachinagano donated some seedlings to help him get started.

More and more farmers decided to switch over to grape cultivation and at its height, there were over 100 farms. But with the development of new towns nearby, the creation of the Kinki University School of Medicine in the area and the aging of the farmers, the numbers soon dwindled. Some farmers still had a strong desire to keep the traditions alive and protect the grapevies planted by their ancestors. Today there are still 34 active farms in Osakasayama although the vast majority of their product is sold locally.

How to Get to Osakasayama

Osakasayama can be easily reached by train from Nankai Namba Station in downtown Osaka. There are three stations on the Nankai Koya Line within the city. The southernmost, Kongo Station, is an express stop which means the majority of trains on the line will stop here.

Most of the places mentioned in this article can be reached on foot. Sayama Pond is just a few minutes walk from Osakasayama station and both Sayama-jinja and Furin-ji are within walking distance of Kongo Station.

The Ono district is a little more out of the way but can be reached by bus from either Kongo Station, or Chiyoda Station which is also on the Nankai Koya Line, followed by a 10 minute walk. 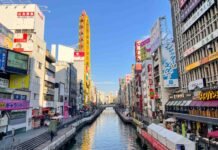 Tour Around Dotonbori – The Best Guide 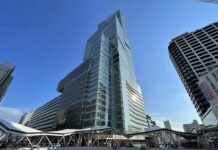